Dogs in focus: the Appenzeller Sennenhund | Under One Woof

Dogs in focus: the Appenzeller Sennenhund 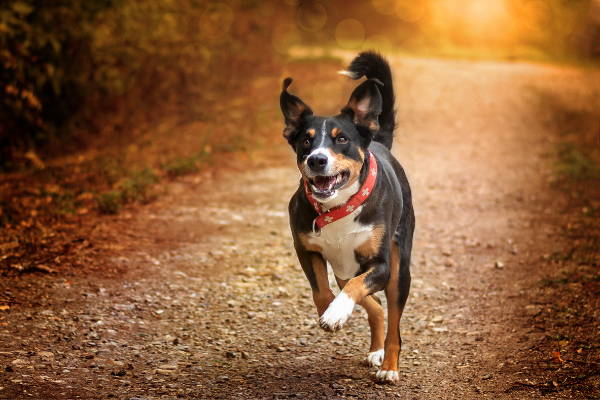 In today’s edition of the Under One Woof blog/newsletter, we’re introducing a dog breed you’ve probably never heard of.

A cattle dog from Appenzell in Switzerland started to make waves in the 1850s. It was known to have a high-pitched bark and a ferocious appetite for work. It soon became more popular in other parts of Europe and numbers are growing in North America today. The breed is rare but well worth exploring.

What’s special about the Appenzeller Sennenhund?

These dogs are remarkably intelligent animals who can be trained to perform complex tasks. They’ve been used for search and rescue in the past and are exceptional herders too. If anything, they’re the epitome of the Working breed.

Appenzellers are also a hardy, healthy breed. They’re medium-sized but can live well beyond 15 years of age; they have no known health issues; and they have boundless energy.

Who is the Appenzeller suitable for?

This is not a dog that will tolerate apartment living. It goes without saying then that they’re not suited to built-up cities. Someone with an Appenzeller might live on a farm or have plenty of land at their disposal.

Another thing to note is that the Appenzeller is prone to barking – and loudly at that. They’ve learned to do so in an effort to alert their masters to things of interest out in the open. All the more reason to ensure you’ve got plenty of open space – and a job that needs doing – before you buy one.

What is the Appenzeller related to?

As an aside, Sennenhund loosely means “dairy farmer’s dog” in English.

What is the Appenzeller’s temperament?

These are lively, spirited, independent dogs with a personality all their own. If you’re looking for a docile, needy companion, look elsewhere. They need firm and consistent leadership, so it’s not a breed for first-time owners. However, experienced owners who have a job that needs doing – say on a farmstead – will find this breed highly impressive.

In terms of socialization, they’re prone to being wary of strangers and need to be socialized early. That said, they can be good around children and adults once they’re taught expected behaviors.  Again, this is a Working animal and one that needs plenty of mental and physical stimulation. Provided you have this environment, you’ll find that the Appenzeller is one of the most able Working breeds around.