Dogs in focus: The German Shepherd | Under One Woof

Dogs in focus: The German Shepherd 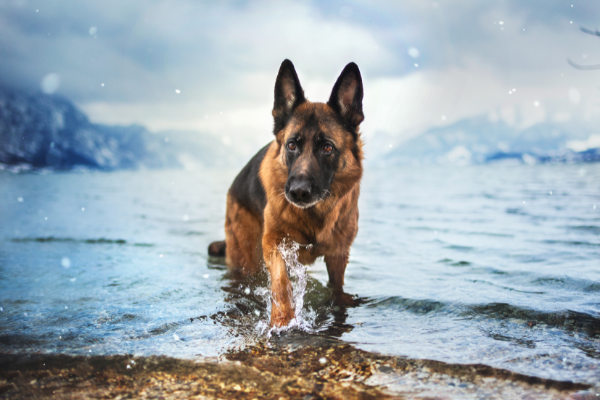 The loyal, hard-working, all-purpose German Shepherd is one of the most popular breeds in the United States. They are as at home with the family and kids as they are in a professional high-risk environment. Truly, German Shepherds are versatile performers who embody the saying, “Man’s best friend”. To follow, we answer the most popular breed-specific questions doing the rounds on Google.

What is the difference between a German Shepherd and an Alsatian?

Want to know a secret? There is no difference. They’re both the same breed, only the names originate from different European countries. Alsatian is from the French Alsace-Lorraine, while German Shepherd is a translation of the German word “Deutscher Schaferhund”. So, the word Alsatian originates in France; and German Shepherd comes from Germany.

Interestingly, German Shepherds were used extensively by the Allied forces during World Wars I and II. However, they referred to the dogs as Alsatian Wolf dogs, as they didn’t want to use “German” – a word that basically described the enemy soldiers they were fighting.

How much exercise does a German Shepherd need?

German Shepherds are made to work, and in lieu of this, they’ll need two hours of exercise daily. Let them go on walks on a lead and enjoy games at home. Like any active breed, they’ll benefit from a structured routine.

How fast can a German Shepherd run?

German Shepherds are among the fastest dog breeds in the world. They’re particularly quick off the line, which makes them a handy tool in the police force. Their top speed isn’t bad either, and at full tilt, they can reach 30 miles per hour.

How many puppies can a German Shepherd have?

Litters vary wildly in size, from a single puppy, to as many as 15. The average is about 8, but it all depends on the mother (the dam). Her first 2 litters tend to be smaller than her later ones, though that doesn’t hold true if she’s getting too old. Her prime? Between 2-5 years.

Male German Shepherds get to 26 inches in height, and females get to 24 inches. They’re medium-sized dogs that weight between 50 lbs and 90 lbs, depending on the sex. Males, as is the norm, tend to be larger and heavier and require slightly more food. If you’re new to dog ownership, you might consider a female over a male, as they tend to be less “aggressive” (energetic) and more even-tempered with other dogs. That said, you can’t go wrong with either sex. Yes, there’s a reason the German Shepherd is one of the most popular dogs in the country.