Dogs in focus: The Greyhound | Under One Woof

Dogs in focus: The Greyhound 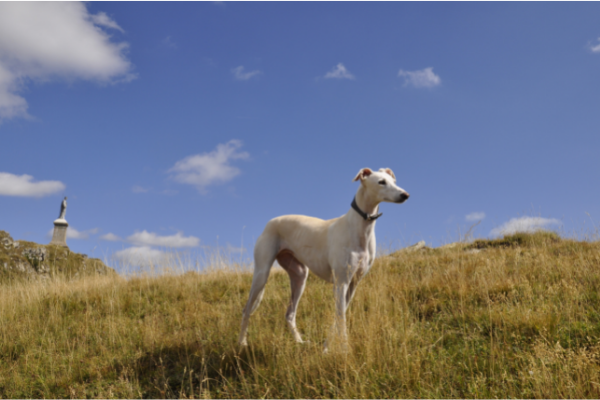 Known as the “champion sprinter”, the Greyhound is an athletic breed of dog that grows to about 30 inches and lives between 10 and 13 years on average.

They’re good-natured dogs and can be wonderful additions to the family home, though their sheer athleticism means they’re not suited to city-living, hampering their popularity somewhat.

What is the speed of a greyhound?

The Greyhound is the fastest breed in the doggy kingdom. She reaches a top speed of 45mph and is regularly bred for professional racing.

A major reason for this is the way she’s built: her body is an upside down S shape, with a chest that curves upwards into the waist. She’s also very lean, with powerful legs and upper body strength. All this combines to create an explosive animal that’s only slightly slower than a lion across the ground.

Did you know? While running, Greyhounds are airborne 75% of the time.

What is greyhound racing?

In the United States, greyhound racing is a sport that people gamble on. It comes from a tradition in 19th century England of racing greyhounds on a straight track; the oval tracks we know today followed in the early 20th century. Greyhound racing has attracted some controversy, and there are questions over the ethics of the practice. Nonetheless, it’s undeniable that the breed has an impressive ability to hit high speeds.

What’s it like to own a greyhound for the home?

You don’t need to buy a Greyhound and then take it to the track. In fact, she’ll be more than happy to laze away beside you on the couch. That said, she will need a regular exercise schedule to stick to, so make sure you’ve got the time in the day to look after her needs.

Greyhounds are typically good with children, though not always the best around other pets. Because they use their nose to lead them, the smell of a cat might set them off in hot pursuit. Still, with the right training, there’s no reason you can’t introduce her into a multi-animal home.

If you need to crate her, opt for the extra-large 48” variety on those trips away from home – say, to the vet. The good news is Greyhounds are typically healthy and rarely drive up expensive medical bills.

What makes the Greyhound special?

Besides its sheer speed, the Greyhound is one of the oldest-known breeds in existence, and was so famous, it was even mentioned in the Bible. You can trace its origins back thousands of years to Ancient Egypt, where it was used to chase away wildlife at the behest of powerful pharaohs.