Body language tells and secrets: how to read what your dog is telling you | Under One Woof

Home > Blog > Body language tells and secrets: how to read what your dog is telling you

Body language tells and secrets: how to read what your dog is telling you 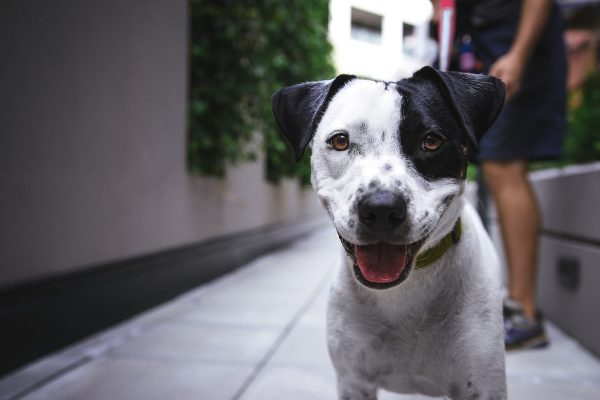 Dogs might not share the same language as us, but they regularly communicate how they’re feeling through their bodies.
Below, we break down what a happy, alert, aggressive, submissive and stressed dog looks like, including signifiers to be on the lookout for.

Mouths say a lot about how a dog is feeling. Here are some telltale signs that give an insight into how the animal is feeling.

– A dog that’s in a good mood and willing to be approached is likely to have its tongue lolling out of its mouth in that typical doggy pose we all know and love. Dogs that are feeling playful will adopt a similar pose with their mouth.

– A dog that’s had its attention arrested, or is on the hunt for something, will have its mouth firmly shut.

– A dog with its teeth bared and its gums on show is asserting its dominance and is telling you, and everyone around it, that it’ll act aggressively if challenged. Approach with caution – in fact, don’t approach at all.

– A dog that’s licking another is using its mouth as a way of saying its submissive; that it’s not in charge and willing to do another’s bidding.

– A dog that’s panting is likely to be either overexerted or, if exercise hasn’t been on the menu that day, very stressed.

– Another great indicator of a dog’s state of mind is its tail.

– A happy dog has a relaxed tail that’s very much down, while a playful dog will wave its tail and crouch down in that cocky, excitable pose that dogs adopt when they want to play fetch. The tail in a playful dog is often the highest point of its body.

– A dog that has had its attention arrested will likely have a tail that’s rigid and pointing almost completely straight away from its body.

– Dogs that are feeling dominant or aggressive will have a tail pointing skywards. This isn’t to be confused with the playful dog. A dominant dog’s tail might twitch or vibrate as if charged with static.

– A submissive dog will adopt a pose with its tail that, as the saying goes, is between its legs, though you might expect a wag or two.

– Finally, a stressed dog will be hunched low with the tail slotted between its legs.

The way a dog stands tells you almost everything you need to know about the way its feeling. Added to that, the fur is a very good indicator of mood.

– Relaxed dogs have relaxed coats – that is, the fur is down, and their body is in neutral. Their head is raised in a confident manner, but there are no outward signs of dominance. Playful dogs will hunker down, as mentioned above, but their coats will be normal.

– A dog that’s had its attention captured is standing tall with wide eyes. Its coat is also soft and smooth.

– Hair stands on end when a dog is feeling aggressive. This in conjunction with the bared teeth and forward-facing pose should tell you everything you need to know about making that ill-advised approach.

– Submissiveness comes through in body language. A paw might be raised; the ears will be pressed against the skull; short, sharp wags of the tail will spell a hope that all is well.

– A dog that’s stressed will try to avoid being seen. It’ll hunker low, sweat coming off its paw pads, its body radiating heat, ears tightly pressed against its skull and pupils wide and dilated.