Dogs vs Cats – how to choose which is right for you 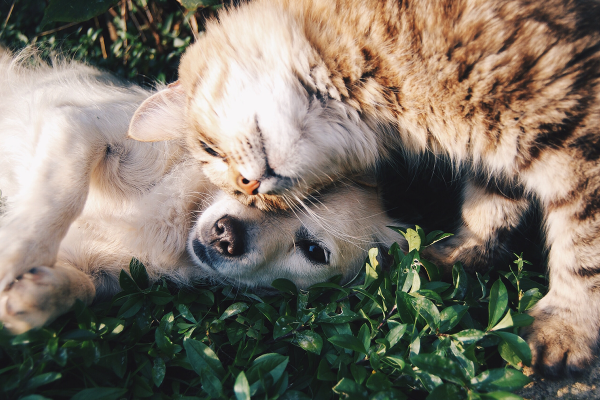 Here at Under One Woof, we love our dogs, whether big or small. But we understand that dogs aren’t right for every owner and that certain people are better suited to the other most popular animal in America – the humble cat. In the not-entirely fact-based article to follow, we’ll unpack the differences between the two, with the goal of helping any first-time owner work out which is best for them. Ready? Let’s get started. (Oh, and one other thing. It goes without saying that we’ve indulged the odd sweeping generalization. Exceptions to the norm do of course exist.)

Dogs are pack animals – and they crave solid social bonds as a result
Wild dogs hunt in packs, and they’re conditioned to follow a leader. In the home, with an owner providing food and shelter, that leader is you. Dogs will almost always follow your lead with nary a question asked. Of course, you do get the odd unsociable dog – one that’s resistant to following. But with a spot of doggy training, these kinks can be ironed out.

The flip side is that a dog needs constant attention, and bears similarities to a child in the way it requires constant comfort and security. Many Americans enjoy an animal that wants to be doted on – and given the adorable breeds on sale, it’s not hard to see why.

Wild cats roam solo – and that trait has been passed down to domestic cats
Ever wondered why cats seem more aloof than dogs? It’s a hardwired trait. In the wild, most cats are able to hunt on their own, and their ability to climb gives them an extra edge over wild dogs. While wild dog survival is predicated on collaboration, cats can easily function on their own.

These traits bleed down – into domestic cats as well. As individuals, they can survive in an empty house and often sleep for large portions of the day, only to skulk the corridors of your home after dark. Cat videos abound on Instagram showing our furry companions nestling against their owners’ necks and faces – all while their owner sleeps. If you want to know what your animal is up to every hour of the day, get a dog – but if you appreciate an animal with an independent spirit, a cat has your name on it.

Cats are easier to potty train but harder to train beyond that
Whip out the cat box and a cat will almost always know what to do, such is the way the litter tray mimics real-life conditions. But if you’re looking for an animal that’s going to understand and obey the tone of your voice in more specific situations, a dog is a better bet.

Cats are cheaper and less time-consuming
Budgets always have to be kept in mind. Cats aren’t going to cost you as much – whether it be dollar bills or time. That’s because doggy training can get expensive, and you’ll need to exercise your canine companion regularly too. That said, the bond forged between a dog and its owner is one of the strongest in existence, something that can make the cost implication seem irrelevant.

Dogs need more space
Owner of a large home? A dog – especially larger breeds – will be right at home. But if you’re in possession of a small apartment, the springy hind legs of the cat will find myriad ways to get pleasure. Because cats are great climbers, they can make the most of even a cramped environment. That said, anyone with a yard will be instantly popular with both species. Both cats and dogs enjoy the option of being able to explore the outdoors.