Dogs in focus: the French Bulldog | Under One Woof

Dogs in focus: the French Bulldog 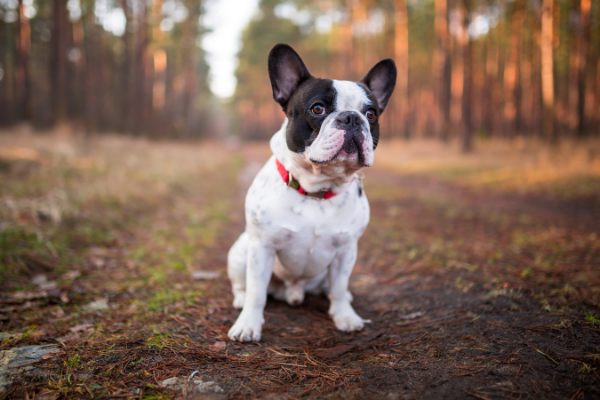 Adorable and smart, Frenchies are often likened to little humans because of their inquisitive nature and general smarts. A bulldog with terrier and pug in it, the Frenchie sports a sunken face and distinctive bat ears. It might not be the prettiest dog around, but it sure is one of the most beloved.

What’s the history of the French Bulldog?

Despite the name, it’s believed the Frenchie first came to prominence in Nottingham, home of the outlaw Robin Hood. Later, the dog was taken over to France and it was here, in Paris, that it started to gain even more traction – before earning its name in the process.

Why is the French Bulldog so popular?

In 2013, the Frenchie wasn’t even one of the top 10 most popular breeds in the United States. Today, it’s in position number 4, just behind three family favourites: the Golden Retriever, German Shepherd and Lab.

So why the meteoric rise?

Well, for one thing, Frenchies have suddenly become cool amongst city-dwellers. Their almost-human personalities and small size make them a quirky companion on city walks, and they’re very adaptable, so they don’t mind apartment living.

Frenchies are also diminutive, so they don’t need the level of exercise and feeding that a Lab or Golden Retriever would need. And, while they’re outgoing, they’re not boisterous. This means they’re not excessive barkers.

All Frenchies have the traditional “bat-shaped” ears; and an overwhelming majority have a black nose and a black coat free of any other streaks of colour. Their coats are short and smooth, while the skin around the head is soft and loose. These dogs are strong, with a broad chest and a tucked-in belly. They have muscular hind legs as well. The tail is never curly and hangs low with a fine tip.

What does a pedigree French Bulldog cost?

The upfront fee for a French Bulldog ranges from $2,000 to $3,000; a fee that’s largely down to the fact that Frenchies are bred specifically with a certain look in mind.

How long do French Bulldogs live?

You can expect your French Bulldog to reach the age of 10 on average and live to 14 in rare cases. Frenchies commonly die from cancer as they get older, but because they’re a small breed, they’re likely to outlive larger dogs.

French Bulldogs don’t shed as much as dogs with longer coats, though they do shed their undercoat approximately twice a year. As for hygiene habits you can help with: brush the coat once a week with a soft bristle brush, and wipe the folds in their face while you’re at it. As a final step, bathe once a month.