How to deal with difficult, tense, aggressive dogs | Under One Woof

Home > Blog > How to deal with difficult, tense, aggressive dogs

How to deal with difficult, tense, aggressive dogs 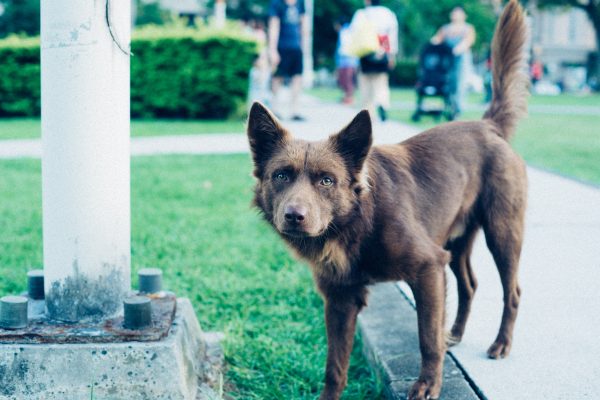 Chances are, you come into contact with dogs all the time. You might own a large number of them at home; you might work with them professionally; you might simply come into contact with them when you’re out and about. The article that follows is designed to help you interact with dogs better: specifically, dogs that are initially unwilling to be friends. Here are some good tips to keep in mind any time you come face to face with a dog that is outwardly scared, aggressive – or both.

The first thing to note is that many dogs are aggressive because they’re scared. Dogs typically attack out of fear, not spite.

Is the dog low to the ground, in a crouched position? Are their eyes wide? Is their tongue moving rapidly? Are they yawning? Are their muscles tensed and their tails tucked? These are all signs that a dog is intimidated. Frightened dogs are unpredictable dogs.

If a dog doesn’t approach you directly, they’re doing it because they don’t want to.

Many times you’ll see people forcing the interaction. In other words, they’ll walk forwards, hands outstretched, muttering platitudes the dog has no way of understanding. The problem? Hands and faces are the most commonly bitten areas on the human body. Ergo, this is not a good tactic. Instead, if you want to make contact, crouch down and make no movement at all. What you are essentially telling the dog is that your space can be invaded; that you’re a willing supplicant. Play the waiting game first. Use hand gestures to invite him forwards. Use a soothing voice to do the same. Speak slowly and calmly. If all else fails, a doggy bone or treat should do the trick.

Use treats to settle a dog

If you’re bringing a tense dog into your own, culinary treats, bones, and toys are all great ways to settle it down. Reinforce positive behaviors and give a dog space when they’re in a negative mindset. Bad behavior should be ignored entirely; don’t fall into the trap of raising your voice at him. He’ll take this as validation that what he’s doing as right. We often forget that dogs have no idea what we’re saying, and are responding to our energy rather than our words. Loud shouting can hype a dog up, rather than settle him down.

Tension manifests itself in other ways

Let’s say a dog does approach and ends up showing affection. All good, right? Not necessarily.

Some dogs express their behavioral unease this way. It can be a confusing one, but it’s common. They might roll over and show their tummy, or lick you when you’re giving them a stroke. What they’re actually doing – in many cases – is asking you to stop.

This is an act of submission on the dog’s part. They’re appeasing you but wanting space to recalibrate, without knowing how to ask.

The dog on its back revealing its tummy isn’t necessarily asking to play – it could be asking for mercy.

The dog that licks isn’t necessarily enjoying the interaction – he’s asking for a break.

Simply pausing and walking away will let you gauge what mental state the dog is in. It’s often the dogs keenest to appease us that end up giving us a nip.

So keep the interaction to a minimum at first, until you’ve got a handle on them.

If you’re the owner of a dog that bites, it’s tempting to use force to make them comply. But muzzles only compound the problem, and more and more professional handlers are advising people to steer clear of them. It’s far better to earn the dog’s trust over the long term. It might not provide the immediate benefits of a muzzle, but it’s the only sustainable solution out of the two.