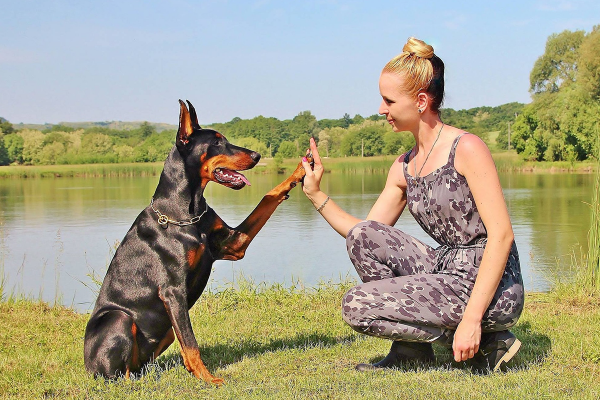 When we talk to dogs, we tend to use the ears and the eyes to communicate. We put out our hand in a restraining way, palm facing outwards, a reassuring or commanding phrase following our gesture. “Stay”, we might say. Or “stop it.” Or “leave it”.

But as famed dog behaviorist Cesar Millan has noted, a dog uses one tool first and foremost: its nose. A dog’s sense of smell is upwards of 40 times more sensitive than our own sense of smell, and if you can harness this, you’ll be able to achieve mastery.

What follows are a series of tips designed to ensure a dog treats a stranger with respect. When dogs meet people for the first time they make all sorts of associations, and they establish patterns of behavior that can be very hard to get out. If you don’t teach a dog to dispense with its bad habits, you’ll keep finding that it harasses strangers, paws at people, gets in their space, and generally makes a bad impression. Worst, you don’t want a dog causing someone vulnerable harm.

Thus, teaching dogs to behave themselves when they first meet strangers is paramount. By following the steps outlined below, you can stop a dog from treating strangers poorly.

Step #1: Start off with food
Enlist someone who has never met your dog before to make an approach holding a bowl of food. Keep the dog on its leash, lightly restrained, but don’t pull too tight. No need to be overly restrictive. Have the stranger hold the food out in front of them, just out of reach of the dog.

Now, very important: ignore the dog completely and have a conversation amongst yourselves.

When holding the bowl, the stranger should have it tight to their midriff, as if they’re claiming it for themselves. Millan asserts that this is a hugely important signal to a dog.

Step #2: Establish distance
Wait for the dog to back off, to stop jumping on its hind legs as it tries to get at the food. Pay it no heed while it’s acting up.

Step #3: Wait for the dog to cede ground, and to adopt a calm pose
Once the dog has stopped sniffing the bowl, he or she will return to a seated, calm position. Only once this happens should the third-party reward the dog for its positive behavior with an edible treat.

Remember this acronym: N.E.E. Nose, eyes, ears. Dogs use their noses first and foremost, and taking advantage of this is the best way to establish serenity.

Many adults make the mistake of creating an environment that is overly stimulating to inexperienced dogs.

Well, they follow the human conception of conversation, which is E.E.N. Ears, eyes, nose. As owners, we tend to try and talk first. We try to use our hands to signal our intent. And very rarely do we appeal to a dog’s sense of smell. By flipping the equation around and by carefully watching how the dog is acting (is it submissive, or is still agitating to get its way?) you can create distance and teach your dog to begin handling strangers with courtesy.

Dogs demonstrate respect by giving someone space. A dog that’s jumping all over your friend is a dog that doesn’t respect that person. Make sure you train your pup out of this habit, or you’ll find that you’re dealing with increasingly poor behavior. Dogs are willing to learn so long as they’re giving the correct instructions. By appealing to their noses, not their ears and eyes, you’ll help a dog understand that submissiveness and respect are the keys to a happy, harmonious existence.