Looking to break up a dog fight? Here’s how! | Under One Woof

Home > Blog > Looking to break up a dog fight? Here’s how!

Looking to break up a dog fight? Here’s how! 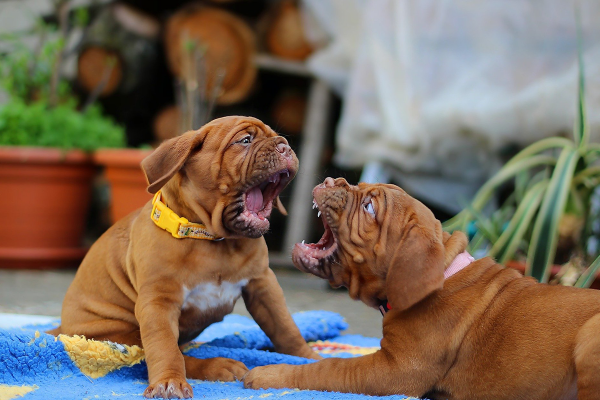 Picture the scene: you’re walking down the road when you come across two dogs going at one another physically. Heaven forbid, it might even be your own dog caught in the fray. You want to take action – of course you do, but you’re worried about the consequences. You umm and arr and act indecisively. A bad move.

Step #1: Resist the urge to shout

Behaviorist Cesar Millan cautions against one yelling at the top of your lungs for the dogs to disengage. This will be an ineffective strategy, and it’s only to be used if you’re actually calling for help (though Millan notes that people often won’t come to your aid, even if you appear to be in distress).

A far better tactic is to slow things down and watch the dogs in action. Who is the dominant participant in the fight? Who is winning? Who is, by extension, more aggressive and willing to take things further? This is the dog you want to target.

Step #3: Give the right touch

Millan advises giving the aggressive dog “the right touch”. Go for the “ribcage area.” It will force the dog to open its mouth and disengage from its foe. (It goes without saying that you should only do this when the time is right: in other words, when you’re least likely to get accidentally bitten.)

Step #4: Use the right touch in concert with a grunt or loud word

Another trick? Speak loudly or grunt assertively, then “pull up from the back of [the dog’s] neck and collar – not from the top, but from the back…” This will ensure you’re disengaging the aggressor, rather than signaling to the aggressor that you’re participating in the scrum.

It doesn’t matter whether you’re confronting a Rottweiler or a Chihuahua – the same tactics apply. As ever, a calm yet assertive energy is important. Dogs can sense fear and apprehension, so act decisively.

In any confrontation, there’s a big difference between the dominant and submissive party. Chances are your dog has never been in a fight (hopefully), but if you’d like to work out whether it’s more likely to be the instigator or the unwitting participant, look out for signs of dominance.

• Stare you or other dogs down
• Steal or guard food/toys
• Win tug-of-war against their peers
• Making other dogs wait
• Mount their peers, whether they’re male or female

Submissive dogs, by contrast, are more likely to:

• Roll on their backs to show off their belly
• Retreat from dogs who are intent on taking food/toys
• Lick the mouths of more dominant dogs
• Lose at tug-of-war
• Baulk at staring contests
• Urinate submissively, especially when in the presence of dominant peers

*Disclaimer: Breaking up dog fights can be dangerous and you may get injured in the process. It needs to be done with caution and safety in mind.