Dogs in focus: The Rottweiler | Under One Woof

Dogs in focus: The Rottweiler 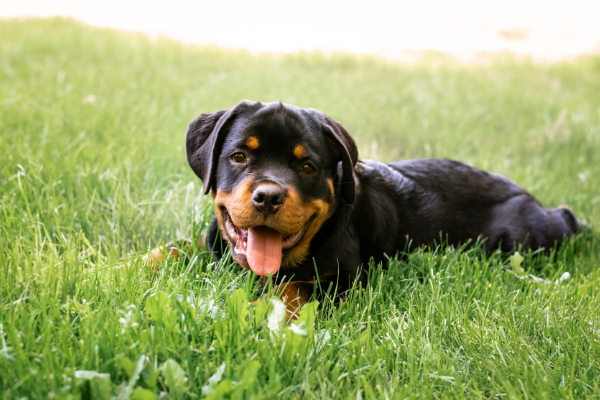 The Rottweiler – or Rottie, as it’s affectionately called – is an historic breed that heralds from Europe. It ranks as the eighth most popular dog type in America (2019), behind the Beagle and in front of the Pointer.

Rottweilers need a stable home and a good level of training. Socialization is necessary early on to temper the Rottweiler’s territorial instincts, but harnessed properly, the Rottweiler’s personality makes it a fantastic guard dog, and this working breed is regularly employed by law enforcement agencies to tackle difficult, high-risk tasks.

Rottweilers are powerfully built, with muscular bodies that benefit from regular exercise. They actively enjoy running, walking and swimming, and are particularly well adapted to obedience training. As a working breed, they enjoy being put to use, and are often happiest when able to enjoy an active lifestyle.

The Rottweiler is known to be a dog that originated in Germany, but it actually originated in Rome. The Romans used Mastiffs to herd cattle to great effect and brought these dogs with them to Germany. After the dissolution of the Roman empire, the dog remained in its new home, finding work in the town of Rottweil, where it herded cattle. The breed began to take shape and became known as the Butcher’s Dog of Rottweil, or Rottweiler Metzgerhund, because of the job they performed pulling meat carts to market.

Rotties are social animals and they need regular human interaction. Left to their own devices, without proper training, they can become restless fast. They’re intelligent and easy to train, but they can be stubborn, so basic training should be provided early on. When socializing a Rottie, do not resort to aggression, as this will spur the animal to react in kind.