Tips for taking your dog traveling - by air | Under One Woof

Home > Blog > Tips for taking your dog traveling – by air

Tips for taking your dog traveling – by air 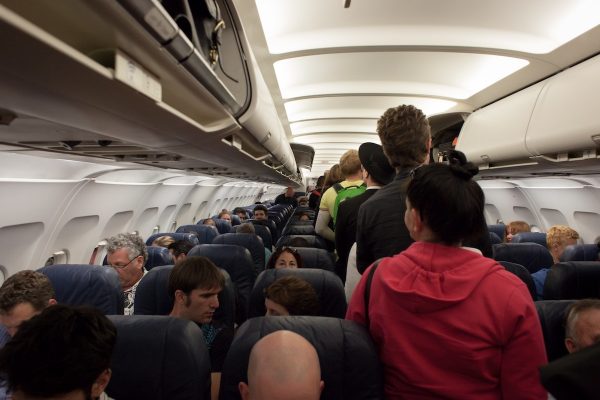 The Fahrenheit is dropping, Christmas is fast approaching, and the urge to get up and explore is an ever-increasing itch. Yes, the holiday season is upon us, and that means families all over America are packing their bags and heading away from home for days or weeks at a time. The question is, how do you take your furry friends with you?

Well, if you’re planning on flying (and why wouldn’t you? America is a big place!) you’re going to need to put some plans in place to get there.

Phone your airline before traveling

While dogs are generally allowed on flights, every airline is free to follow a different set of rules. Phone the airline you want to travel with to check up on their pets policy, or put Google to good use. But making a call is often easiest if you are unsure.

Just because you’ve had confirmation that your pet is able to fly doesn’t mean that this is a guarantee on the day. Airlines are within their rights to refuse your dog if he looks ill or is behaving aggressively.

Nothing in life comes free, and according to Travel and Leisure, you can expect to pay between $100 and $125 for a one-way trip with your dog in the cabin. You will also need the carrier ($30 on the cheaper end, $250 on the more expensive front). For the cargo hold at the back, where the luggage is kept, you can be looking at a price in the thousands. Like anything, it’s best to shop around.

Get your dog used to the carrier

Your dog will be in a carrier for the duration of the flight, so get him or her used to the feeling of being cooped up in a confined space in the weeks before you travel.

Also, be sure to write down the name of your pet on the carrier, its home address, and give your contact details as well, just as you would with normal luggage.

What carrier can I use?

The carrier will need handles, to help airline staff carry it, and it should have two empty dishes, for food and water.

Wire carriers are not allowed and only soft-sided carriers can be used for a dog sitting with the general population of the plane.

The minimum requirement for a dog to fly is that it is eight weeks of age and in good physical health.

All airlines have a strict rule that says minors cannot travel with pets without an adult present. A minor in the United States is anyone under the age of 18.

Before you head off on the journey, make sure you get a certificate from your vet to say that your dog has been immunized against rabies. You will also need a health certificate from the vet. These should both be acquired no more than 30 days before you travel. It goes without saying that the vet needs to be a licensed practitioner as well. In other words, your dog-loving neighbor isn’t going to be able to issue it on your behalf!

Under no circumstances should you sedate your dog before traveling. Yes, it might seem the humane thing to do, keeping the dog tranquil when it’s up in the air. But sedatives can be particularly dangerous to a dog’s wellbeing when the air pressure ramps up.

General tip: Feed your dog four hours before the flight

A dog is going to have bowel problems during the flight – all those thousands of feet up – if he eats right before getting on to the plane. So, try and follow the USDA’s recommendation of feeding him four hours before boarding.

Make sure you arrive at least two hours before your stated departure time. Having a dog with you is going to complicate the boarding process, and there’s no point taking unnecessary risks.