FAQ part 2: What are the risks of letting your dog sleep in bed with you – and more | Under One Woof

Home > Blog > FAQ part 2: What are the risks of letting your dog sleep in bed with you – and more

FAQ part 2: What are the risks of letting your dog sleep in bed with you – and more 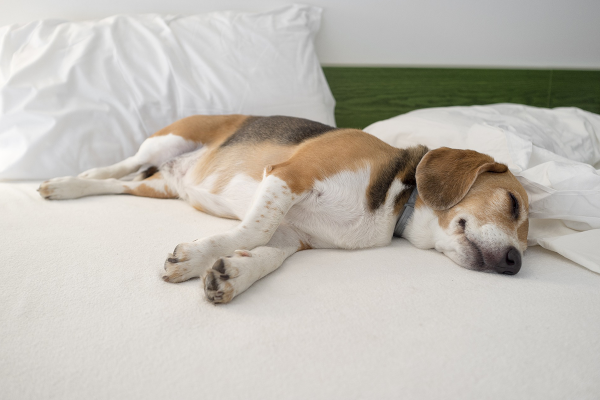 Question #1: What are the risks of letting your dog sleep in bed with you?

Depending on who you ask, this question will elicit a different response, as it all depends on the size of the dog and the circumstances in question.

More often than not, it’s a bad idea if you own an unneutered alpha male. You don’t want the dog claiming the bed as his own territory, and if he begins to see himself as your equal, he may even growl when you try to remove him from his spot.

That said, it’s every owner’s choice ultimately, and if your dog is particularly small and cuddly and you simply can’t say no, who are we to deprive you of that chance? Still, it’s usually best to train a puppy to sleep in its own bed. Use treats and positive reinforcement to make this pain-free.

Question #2: How do dogs act when they’re about to die?

A slightly morbid one this, but worth discussing all the same.

A dog that’s ill, and knows she’s dying, will often look to find places to hide, or sleep in unusual spots away from humans. Cats are the same – they retreat from the world and isolate themselves on purpose.

Other signs include an inability or unwillingness to exercise like normal, and snappy or abnormally aggressive behavior. Does your dog suddenly seem unwilling to accept petting? This might be a sign that something is seriously wrong.

Listen to your intuition because if you’ve lived with an animal for a long time, you’re in a very good position to sense when something is off. Sometimes, a well-timed trip to the vet can be just the tonic; other times it’s already too late. Watch out for signals and you might be able to save a dog’s life before it’s too late.

Question #3: Why do dogs suddenly bark at nothing?

The answer to this question is actually pretty simple: your dog isn’t barking at “nothing”. Their incredible sense of smell and hearing allows them to pick up disturbances that no human can detect. More than likely, they’re hearing something you’re not.

A good trick? Ask them what they’re barking at. Show a little interest. Stand beside them and show that you’re interested. A dog will respond in turn, possibly even investigating the disturbance. It’s probably nothing serious, but you never do know, and dogs are incredibly perceptive. Think about a blood hound, which can track a person’s scent, even hours after they’ve left the scene.

Question #4: How do you keep a dog’s breath smelling fresh?

First and foremost, don’t use human products, like toothpaste or mouthwash. Your first step? Take them for an oral exam. This will rule out any disease of the mouth.

Next? Make sure their diet is good. Give them a toy to chew on so they’re less likely to pick up things in the garden. Brush their teeth regularly using a dog-approved cleaning agent. Finally, make regular trips to the vet for a proper clean, and consider investing in chewable sticks that refresh the breath.