Home > Blog > Why the French Bulldog is the new “it” breed

Why the French Bulldog is the new “it” breed 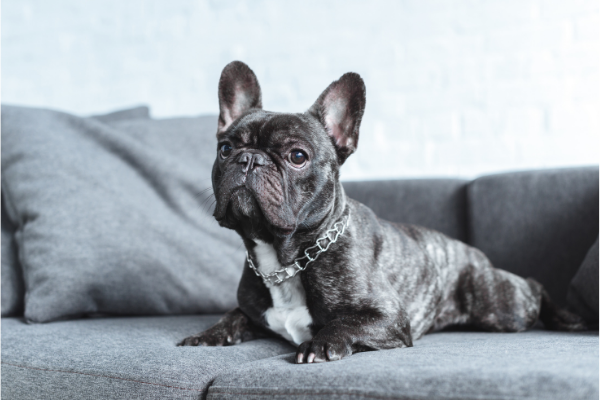 Walk through any major city, be it New York, London or Paris and you’re likely to see hip young people accompanied by a French Bulldog everywhere you go.

The question is, why has this pint-sized breed become so popular, to the point it’s the 4th most common doggy in America and perhaps the most popular city dog of all?

We’ll examine what makes the French Bulldog special and why it might be right for you.

Frenchies, as they’re affectionately called, are nothing if not adaptable. Part of the non-sporting breed, they haven’t got any real physical qualities, but they are very good at slotting in to their environment. Whether you’re a single, one half of a married couple, or the matriarch/patriarch of a big family, the French Bulldog will fit right in.

Frenchies don’t need a lot of exercise: a short daily walk should suffice, which is ideal if you’ve got a busy schedule to juggle. (In fact, because of their flat nose, they can often find it hard to breathe, so strenuous exercise is actually a bad idea.)

Another reason they’re popular is they can happily get by in a small apartment. This is a big reason you commonly see them in major urban cities where rents are high and space is at a premium. What’s more, because they’re quiet, you can safely leave the dog at home with neighbors within earshot.

Finally, they don’t need to be groomed regularly as their coats are low maintenance.

All in all, they’re easy to keep as pets, and this is a big part of their popularity.

French Bulldogs love people. Despite a stubborn streak, they’re easy to train and eager to please.

If you’re having a trouble getting a Frenchie to play ball, you only need to entice them with food to get things moving.

They’re also extremely smart, so training them is relatively easy.

They’ve got a history people buy into

The French Bulldog actually originated from England but became such a staple of Parisian life that the new name stuck.

These small dogs could often be seen sitting beside sophisticated women at cafés in the 1800s and became associated with a certain sophistication.

Alongside the traits outlined above, this might be a reason why they’re coveted today.

The major downside with the breed? They can be quite expensive, costing about $6,000 on average. This is not just because of their popularity, but because they’re an exclusive animal that’s difficult to breed. Ultimately exclusivity equals a higher price, but rest assured you’ve got a city slicker on your hands if you buy a French Bulldog.