Dogs in Focus: the Whippet  | Under One Woof

Dogs in Focus: the Whippet  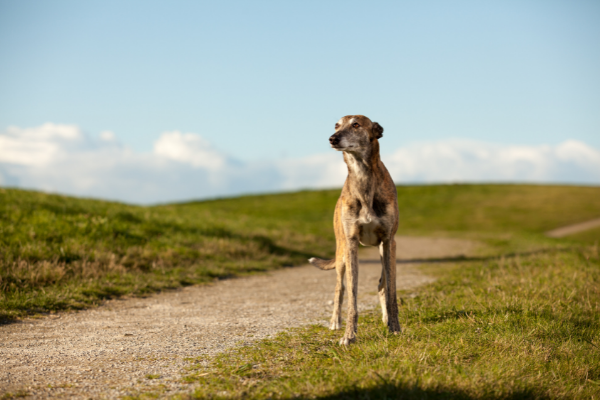 Following on from our last profile — which gave you everything you need to know about the Greyhound — today’s dog is similarly fast across the ground. Yes, the Whippet and the Greyhound share several similarities, and while the latter is better-known and more marketable, the former has a series of endearing traits that make it a wonderful addition to the home.

Here’s everything you need to know about the aptly-named Whippet.

Whippets have a need for speed

Like Greyhounds, Whippets move rapidly across the ground, and are capable of reaching speeds of 35 mph. That’s the cruising speed of a car. Whippets needed to be fast because they were bred to chase after – and catch – live game. Where did they originate from? England.

That said, Whippets are sprinters, not endurance runners. They don’t need constant exercise. A good, brisk walk on the daily will do just fine. Just be sure to keep them on the leash, lest their animal instincts kick in and they spot prey they’d really like to chase.

There are few dogs more easygoing than this calm, comfort-loving breed. Whippets are the personification of nice, and they’ll do anything to please you. Though they’re technically watchdogs, they don’t make unnecessary noise, and they’re very good with children and other pets as well.

Thanks to their relaxed personality, Whippets can safely be taken into a professional setting. They might bark once or twice but they’ll soon learn that they should be well-behaved and obedient. What’s more, due to their slender size, they’re unobtrusive and unlikely to intimidate any colleagues. Nor do they drool or make a mess.

Whippets are super easy to groom

They have very short, sleek coats that need minimal grooming. That’s good news if you’re pressed for time, and better news if you dislike animal hair coating your prized possessions.

Whippets are lesser known – but more popular – than Greyhounds

According to the American Kennel Club’s list of the 200 most popular breeds in America (2020), the Greyhound is in 142nd place, and the Whippet is in 59th. That might be a surprise, since the Greyhound has more name value, but Whippets are smaller, less obtrusive and healthier overall. They tend to live between 12 and 15 years, whereas Greyhounds suffer from bone cancer and hip dysplasia, with a shorter life expectancy to boot.

Neither breed is a bad choice, per se, but Whippets are marginally easier to look after in the long run. Still, you can’t go wrong with either!