What are the differences between cat and dog behavior patterns? | Under One Woof

Home > Blog > What are the differences between cat and dog behavior patterns?

What are the differences between cat and dog behavior patterns? 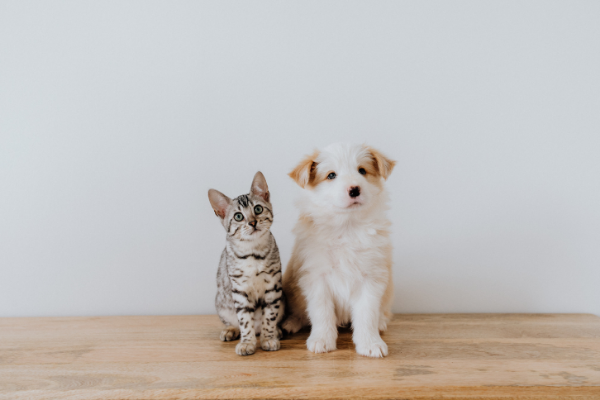 There’s a reason dogs are thought to be more sociable than cats: very often they are. While the latter are solitary animals that hunt alone, the former are used to being in big groups and operating within the pack. Instinctively dogs search for this in the home, which is why they look up to you as a pack leader and want to be kept socially active a lot of the time.

Of course, not every cat is quiet and shy and not every dog needs constant attention, but the stereotypical depiction of both species is grounded in truth.

Cat-like prissiness applies to the bathroom

Perhaps there’s no better encapsulation of the differences between cats and dogs than the way they go to the toilet. Dogs, in their exuberance, don’t mind leaving their number twos out in the open, while cats always make sure to tidy up the mess they’ve left behind, depositing soil on top of their handiwork or using the litter in their box to achieve the same affect. Cats are, in many ways, prissy animals and altogether fussier about leaving a mess.

Cats need exercise, but don’t bother taking them for a walk. Their ability to scale tall objects in the home using their claws – and their suppleness – means they can burn plenty of energy without ever having to leave the confines of the house. This makes them a lower maintenance animal to look after. Dogs, by contrast, need a daily walk to keep them satisfied.

Dogs enjoy the daytime, while cats are night owls

Because wild cats hunt alone, they typically wait until after dark to do their work. They have incredible night vision and great hearing too. This trait still often applies to domestic cats, who might be invisible during the day when you’re up and down the house, but will appear to perk up as daylight hours burn short. Dogs in packs operate from dawn to dusk, and so their body clock is more tightly aligned to our own. This might be a symptom of the fact humans have bred dogs for thousands of years.

Dog and cat owners are often different too

A Psychology Today study suggests that dog people are about 15 percent more extroverted than cat owners and tend to be more agreeable too.

Neuroticism, however, appears to be more present in cat owners, though feline lovers are also typically more artistic and unconventional.

As for people who own both? They’re are most likely to exhibit the traits of the typical dog owner described above, and might very well hold traditional values dear.