Doggy obsessions: how to deal with strange behaviors | Under One Woof

Home > Blog > Doggy obsessions: how to deal with strange behaviors

Doggy obsessions: how to deal with strange behaviors 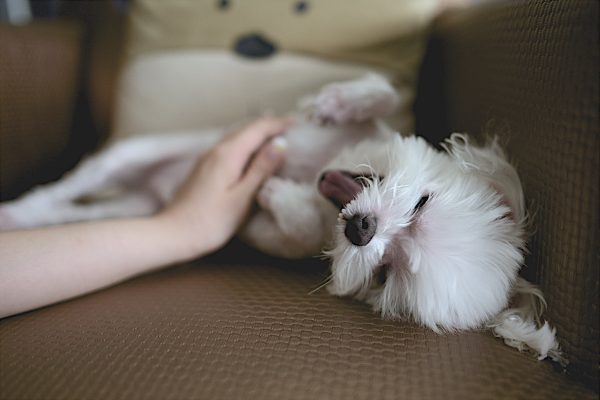 It’s natural as a pet owner to look at your dog behaving strangely and to automatically freak out. Whether he’s obsessively chasing his tail or hoarding your possessions, there seems to be no rational explanation for the behavior, and yet he does it time and time again.

Well the good news is that you’re not alone: dogs far and wide have acted like this since time immemorial, and with a firm hand and a few of the following pointers in mind, you should be able to counteract the behavior in no time at all.

Why is my dog taking my stuff away with him?

Dogs tend to hoard objects that remind them of you. These might be items of clothing or little objects you hold dear. When your beloved animal is taking a little piece of you back to his den, it’s because he’s observed you interact with this object and perhaps, in a roundabout way, is asking you to notice him. More than anything, he knows it’s prompting a reaction, good or bad, which might be a sign that he’s at a loose end around the house. We stress this a great deal, but exercise helps a dog feel centered mentally. So up the walking time and see whether this brings an end to the annoyance.

My dog is hoarding food, and it’s starting to stink out the house

This can be a nuisance and a real pain to sort out, but the good news is that there’s an explanation for it, one rooted in a dog’s lizard brain. Dogs want to make sure they’ve got food for a rainy day, so to speak, and the food they’ve hidden is a safeguard against going hungry. Of course this tactic is rendered null and void by the mere fact you’re feeding them every day, but with no way of communicating this to your pet, you’re going to have to find alternate methods.

Try this: the dog whisperer Caesar Millan recommends taking your dog for a walk before mealtime to make him expend energy and “work” for his food. Only feed him when he’s calm and ready to enjoy his meal sensibly. Make sure he can see the food being laid out away from his reach, and wait for him to demonstrate a submissive emotional state before serving. Once he’s done eating, immediately remove the bowl from him so he can’t go back and ferret away any extras.

It’s important to give your dog a sense of structure. Repetition is key, and by using exercise to lower his energy levels, you should be able to redress this behavior in due course.

Why is my dog chasing his tail?

The first thing is not to be unduly worried about it. Unless it’s causing him some sign of obvious distress, tail-chasing is a perfectly normal form of doggy entertainment. In much the same way we consult our phones when we’re bored, dogs will mess around and chase their tail for the fun of it.

Is he getting enough exercise? A bored dog is often an under-exercised dog. Is he starved of attention? Knowing that he’ll get a reaction out of you might be the very reason he’s doing it. Reinforce positive behaviors and quietly ignore the ones you want to stop; on your own terms, schedule a time when you can play with him, and ensure you’re in a state of mind that’s suitably calm but also assertive.

You should only look to get a specialist involved if the compulsion develops to the point where he’s nipping at himself and causing himself pain. The likely root of the problem in this case is a skin disorder, or a parasite that he’s trying to get rid of. Worms and fleas are both possibilities in this instance.