How to tame your dog’s aggression | Under One Woof

Home > Blog > How to tame your dog’s aggression

How to tame your dog’s aggression 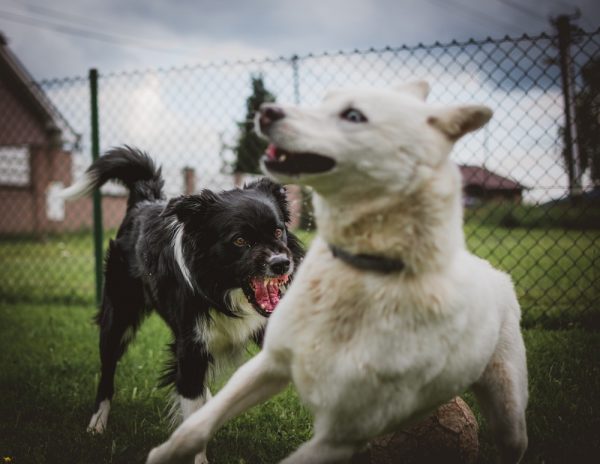 Aggression is a common problem dog owners face, and it’s a reality every owner dreads. Certain breeds are more passive than others, but even the most good-natured litter occasionally produces a dog that growls more than it wags its tail.

The good news is that professional help is everywhere you look, and if your dog is displaying repeated antisocial or aggressive behavior you need to enlist the services of a proper trainer immediately.

Taking him into public when he’s improperly conditioned is dangerous to others. Moving objects, like a runner going past his vision, will likely trigger a reaction. When you’re in a social setting in a quiet stretch of neighborhood, seeing your beloved animal haring after Bob the runner does no good to anyone at all – least of all Bob.

Once you’ve had him trained, however, there are several techniques you can employ to keep aggression at bay, and to keep the situation under control in the long term.

Walks are not negotiable: dogs need to be exercised daily and that’s doubly true of breeds like Labradors, German Shepherds, Huskies, Boxers and Boston Terriers: they’ve got energy to burn and they’ll grow grumpy if they don’t get a chance to stretch their legs. As the old saying goes: a tired dog is a well-behaved dog.

Dogs love to know that they’ve got a purpose, and that’s where a routine comes in. A familiar schedule gives them security and keeps them at ease even when they’re alone. If they know that you’ll be at home at a certain time, and that X, Y and Z will follow on from that, they won’t work themselves up into a state when you’re gone.

Let them meet people – and other animals too

Often aggression is a result of a dog that’s improperly socialized with humans and other animals. You should endeavor to set up social interactions early on in his life, as delaying this part of the growing up process can cause bad habits to creep in, and fear to become a part of your dog’s make up.

Be firm but fair

Dogs are like humans – if they think they can break the rules and get away with it they’ll begin to push their luck. Be firm but fair, lest you start encouraging growling when your pup doesn’t get what he wants. Dogs that are asked to respect you respect themselves.

By the same token, give your dog a reward when he behaves well. Food treats are always a favorite, but simple verbal reassurance works well too, as does a toy of some sort.

There are two things to be wary of here. One, getting angry only hypes him up more. Your animal is extremely sensitive to your emotions and the way you come across. Meeting aggression head on with aggression tells him it’s all part of the game. Focus instead on channeling a calm self-assured energy. A dog is looking to you to be a pack leader.

Two, never resort to violence. Smacking your dog or yanking its collar might stop it misbehaving in the here and now (though it’s just as likely not to work at all), but it’ll sow longer-term problems. Aggression in a dog is often a sign of fear, and by physically hurting it, you’re only deepening that wound, giving it reason to snap in future – where the consequences could be very bad indeed.

Ultimately, dogs respond best to firmness, love and attention. The work you put in will pay dividends in the long run.