The most famous dogs from movies and television | Under One Woof

Home > Blog > The most famous dogs from movies and television

The most famous dogs from movies and television 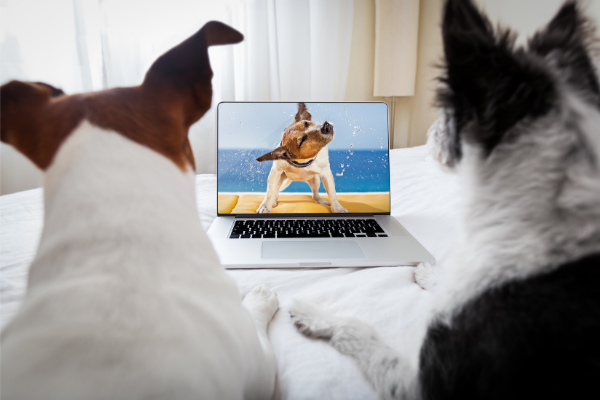 What better way to ring in the end of a long working week than with a good movie? Feet up, doggy companion at your side, it’s the perfect way to relax. With this in mind, we’ve picked five movies featuring famous dogs that are worth a watch. There’s a bit of everything here, from high stakes action to tear-jerking drama. Enjoy.

The Pitbull from John Wick

John Wick might not be the most sensitive soul on the planet, but he does know a good thing when he sees it. After rescuing a glossy black Pitbull at the end of the first film, he stalks the streets of Chapter 2 with his new companion at his side.

John’s parenting skills do need a bit of work, mind, as he’s not the most affectionate soul, though he does give a the pittie a compliment in Chapter 3. “Good dog… you’re a good dog.” By Chapter 4, he might even give him a name.

Chance and Shadow from Homeward Bound

Two dogs and a cat are separated from their owners and must embark on a perilous journey to get home. The dogs in question? Bullish American Bulldog Chance and wise Golden Retriever Shadow.

Like all good movies, Homeward Bound gives its characters a definable arc. Chance starts off selfish and ungrateful for the good family life he has, but he gets back to safety, he gains a newfound appreciation for all that he has in life. Shadow is the wise older brother with the familial instinct to guide them home.

The only problem? Mountain lions, bears and porcupines stand in their way. What ensues is a 90-minute thrill ride no animal lover should miss. Be warned though: you may shed a tear or two.

Frank from Men in Black

While Will Smith and Tommy Lee Jones get the bulk of the screentime in the 1997 classic, Frank the Pug surely steals the show. Clad in a black suit like his owners, he waddles into the frame in comic fashion. Beneath the fur, Frank is actually a Remoolian alien, but he sure did pick a cute exterior to call his own.

Frank was such a hit, in fact, that he was written into the 2002 sequel and makes a cameo in 2019’s Men in Black: International.

The ultimate family dog, Lassie the Collie has been immortalized on the screen for generations, perhaps most notably in the 1994 movie directed by Daniel Petrie. That said, if you prefer something more modern, there is a 2020 movie, which tells the story of the dependable Collie finding a way back to her 12-year-old owner, Florien.

The character of Lassie first appeared in a magazine story written by Eric Knight all the way back in 1938. This was later turned into a 1943 novel, which has served as a basis for the movies that have followed.

The Dalmatians from 101 Dalmatians There aren’t many adults in the English-speaking world who haven’t heard of, let alone seen, the 101 Dalmatians. The 1996 film is something of a classic, as is the Walt Disney 1961 original (itself based on a 1956 novel). A sequel – 102 Dalmatians – was released in 2000 and a spin-off is expected in May of this year.