Home > Blog > The most popular dog breeds in America (part one)

The most popular dog breeds in America (part one) 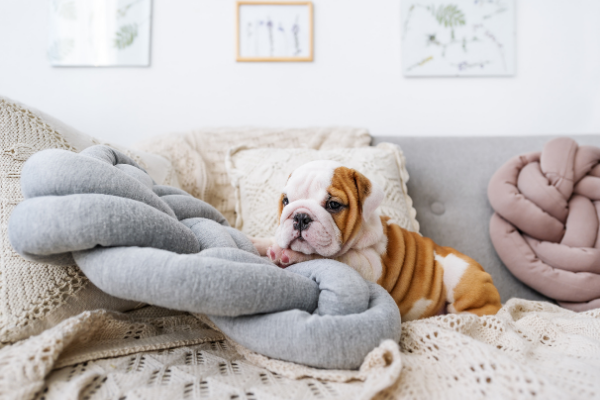 Dogs are the most popular four-legged companion in the United States. According to a 2018 survey, 60 million American homes are thought to have almost 90 million dogs as pets (Insider.com).

Of that 90 million, there are 197 breeds recognized by the American Kennel Club – the premier authority on all things doggo – and many mixed/cross breeds in existence as well.

That adds up to a lot of difference faces, temperaments and personalities.

Still, there are a select few breeds that crop up over and over again: classic dogs that are a safe bet in the home. And in the article to follow, we’re going to pinpoint the ten most popular breeds in America in 2020. Many of these will be familiar to you, while a couple might come as a surprise.

In part one, we kick off with the first five.

This one’s really no surprise. The Lab has been an American favorite for 30 years and continues its reign atop the list.

Labs make wonderful pets, in part because they’re friendly, sociable and devoted to their families.

What’s more, because Labs are so popular, there are no shortage of training aides and professionals willing to help socialize them early.

The French Bulldog had a good 2020, gaining popularity in America (as well as Europe), and as of 2020, the Frenchie ranks above the German Shepherd and Golden Retriever for the first time.

One of the reasons for this surge? These dogs can live quite happily in small apartments and are popular with the jet setting Instagram crowd who like to post pictures of their dogs as much as their travels.

It doesn’t hurt that the Frenchie is adorably cute, either.

German Shepherds are dependable guard dogs. Early training is important – if only to subdue their more boisterous tendencies – but with the right are and affection, they can not only take orders but keep the entire family entertained.

They fare best in active families, but provided they get the due level of exercise they require, they’re gentle, intelligent and watchful animals.

Station them at the front door at night and they’ll quite happily guard the home as if it’s their own.

These beautiful animals are a staple of suburban life – and it’s not hard to see why. Golden Retrievers enjoy taking orders, but they also have a real zest for life, and are quite happy to accompany their owners on long walks before jumping on the couch in front of the TV. They’re easygoing and tirelessly committed to pleasing their owners.

In short, they make great companions.

Bulldogs certainly have a unique look: their deeply-set eyes are far apart above a sunken, short snout; below this, loose skin frames a mouth that opens wide to reveal an enormous pink tongue. In fact, the image of a panting Bulldog is synonymous with the breed and revealing of one trait you should keep in mind: they’re not very good at regulating their body heat.

Despite this, Bulldogs are incredibly popular, in part because they get along with the whole family and don’t mind rubbing shoulders (or snouts) with other pets. They’re laidback, undemanding and happy to take life in their stride. You could do far worse!