Home > Blog > How to stop your dogs from mouthing and nipping

How to stop your dogs from mouthing and nipping 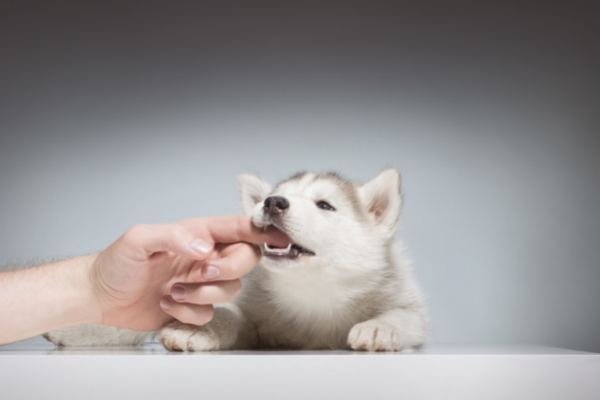 Young pups use their teeth to get a feel for the world around them. With that in mind, nipping and mouthing (the act of putting mouth and teeth over skin with no downforce) are part and parcel of early development.

But what do you do when your dog goes over the top? And what are the steps you can take to combat misplaced excitement?

The first thing to recognize is that mouthing and nipping are normal parts of a puppy’s development. Young pups will play together and use their teeth on one another. When one goes too far, the victim will usually let out a yelp and back off. This teaches the offender to rein in the level of aggression. When they re-enter the game, they both know that it doesn’t pay to go too far.

The same rules apply with people

When playing with a dog, it’s important to teach them that your skin is delicate. Let him put his mouth over your hands, but if he nips with a great degree of force, let out a high-pitched yelp and let your hand go limp. Your dog should immediately stop what he’s doing, which is when it’s time to give him praise. Start the game up again and repeat the yelp if the same thing happens again. Do this three times in a 10–15-minute window.

Is “yelping” alone not working?

Another trick is to yelp, then stand up and leave the room for 30 seconds. Once the time has elapsed, return and keep playing. The time-out reinforces the message that hard nipping is not acceptable.

The goal from here is to keep using this trick for smaller and smaller bites, so that your dog learns to apply less and less force.

As a word of warning, never initiate a game by waving your fingers in your dog’s face or hitting or slapping him. This could ramp up the stakes of the game.

Eventually, you want the biting to stop altogether

By following the steps above, your dog will learn to apply less and less force to your skin. From here, you want the nipping to stop altogether.

At all times, refrain from getting aggressive with your pup. This can cause him to get more excited, and it can lead to behavioral problems down the line. If all the steps above are not working, however, consider consulting a professional trainer. Mouthing and nipping can be challenging issues to solve, and there’s always a helping hand out there to take care of the problem for you.