Dogs in focus: the Great Dane | Under One Woof

Dogs in focus: the Great Dane 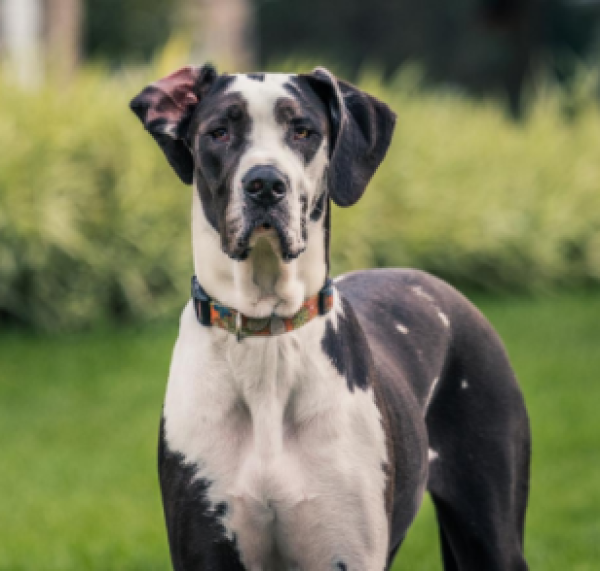 There are few dogs that make a statement quite like the Great Dane, whose imperious name is matched only by his stature.

Watch him get on to his hind legs and he’s taller than most adult men.

Interestingly, Danes aren’t Danish at all – in fact, they’re a German breed, once used to hunt wild boars alongside nobleman, and referred to as the Deutsche Dog (“German dog”) in their native country. The name is thought to be a result of escalating tensions between Germany and the rest of the world, and a name that was coined by the French naturalist Georges-Louis Leclerc, Comte de Buffon.

With a short and smooth coat, the Dane doesn’t need a lot of maintenance. A weekly brush will suffice, though when he hits shedding season – usually in the springtime – you’ll want to brush his coat more often.

As an athletic build, the Dane likes to run a lot, and so you should check his nails periodically and make sure they’re clipped to prevent injury.

Bred to hunt game, the Great Dane is used to being active and should be given a walk every day at a minimum (two walks a day is never a bad idea).

When out and about, make sure he’s on a leash, because he’s liable to get excited and head off into the underbrush if not.

If you’re going to go jogging, wait until he’s two years of age or older so that you don’t cause damage to the joints – ignoring this advice can be damaging in the long run.

Though slim, Danes get a bloated tummy around the times they eat, so let them digest their food first (bloat is, in fact, the number one killer of this breed).

The Great Dane is friendly around children and makes a wonderful family dog. For singles, the breed is actually well-suited to an apartment, and they can be very relaxed, content to laze around for long hours of the day. That said, they need plenty of face to face time as well, so keep this in mind.

No matter your living situation, make sure you get your Dane properly trained in obedience and discipline. Their powerful stature makes them a handful if prone to misbehavior – especially in the earliest puppy stages.