Training your dogs and cats to live together | Under One Woof

Home > Blog > Training your dogs and cats to live together

Training your dogs and cats to live together 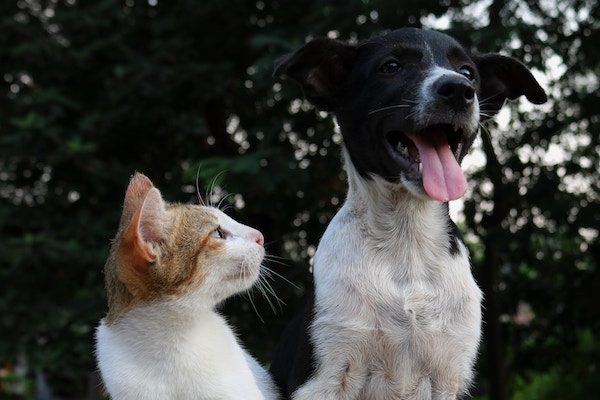 Cats and dogs. They’re a pairing as old as time itself, and yet despite this history, they’re not always the best of friends. Getting our feline friends to put up with their larger doggy counterparts can be hard work, but if you give your dog the necessary training, you can foster a relationship that will take you by surprise.

Introduce one another to the smells

Smell is huge in the animal kingdom. In fact, it’s the essential tool of communication. To get the animals used to one another faster, rub a towel over your cat and place the towel under your dog’s food bowl. This will get your dog used to the foreign aroma. In fact, you can do it in the reverse with your cat too.

If you don’t want to use a towel, substitute it for bedding, toys and other items commonly used by one pet or the other.

Stair gates are good for cats. They’re generally too narrow for dogs to pass through, but they’re wide enough for cats, and they can be fitted with flaps to boot.

A stairgate makes sense in your house because it allows both animals to get use to one another without physical contact occurring.

Give your cat an area it can feel safe in

Dogs are naturally bigger and stronger than their feline friends, and if dog is new to the house, it’s natural for your cat(s) to feel threatened. The answer is to give the smaller, more vulnerable animal a space in your house that’s theirs – and theirs only.

Make sure you kit it out with all the necessities: litter tray, sleeping quarters, food and water, and check up regularly on the kitty inhabitant(s) too.

Make the introduction – but do it cleverly

They’ll need to come face to face at some time, but make sure the “safe area” is near to your cat, because if the going gets tough they’ll want to bolt to safety. Depriving them of that opportunity is really just cruel.

Attach a leash to your dog and keep a stair gate between the animals. Next, line up the snacks for your dog, and give it to the dog when s/he behaves well. Leave the cat to its own devices. If she wants to approach, let her do so, but forcing the issue is a mistake.

Keep familiarizing your pets with the smell of their peer. Stroke your cat then stroke your dog without washing your hands. When you take the dog for a walk, give the cat the house to explore in full. When the cat is in its safe zone, let the dog sniff out the places its companion has been.

The more you get the animals familiar with one another’s scent, the better.

A cat typically doesn’t run away from a dog just because it’s… well, a dog. A cat runs away because it senses volatile energy waiting to explode, or because it senses that it’s up against an animal that’s unpredictable. Your job as an owner it to coax the dog into a serene mindset – and keep it there. Invest in something like a houseline, which is a leash with a clip that can be attached to any stable structure. A houseline works because the dog doesn’t think you’re holding on to a handle, yet it’s still forced to obey the length of the leash. It’ll gradually learn to get along with this strange furry animal that lives alongside it in your house.

In the end, the idea that dogs and cats can’t co-exist is entirely incorrect. As a search of “dogs and cats” on Google Images will attest, there are plenty of opportunities for companionship, provided you let them get to know one another at a slow pace.