How to stop your dog stealing food | Under One Woof

Home > Blog > How to stop your dog stealing food

How to stop your dog stealing food 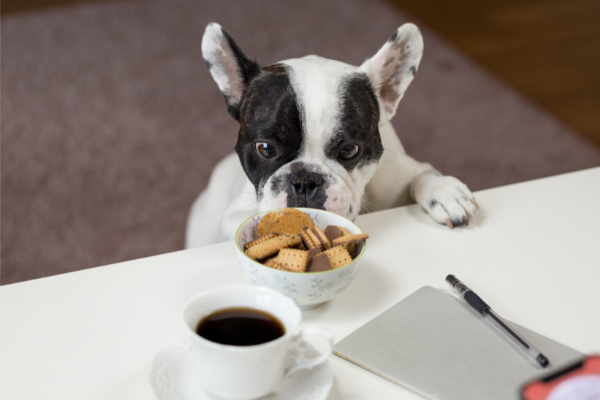 Our furry friends have some bad habits that get tiresome fast. Whether it’s excessive barking (which you can find ways to combat in our article on the topic), leaving a mess or chewing the furniture, it’s always a good idea to stamp out these bad behaviors quickly.

With that in mind, is there anything more annoying than putting some fresh food on the kitchen table, only to discover that your pesky pup has eaten it?

In today’s article, we’ll examine why dogs turn thieves, and what can be done about this annoying habit.

Why do dogs steal food?

Boredom: dogs that are left unattended for long periods of time will resort to mischief-making to keep themselves stimulated. If your dog is bored, he might steal food; he might also chew up the furniture and make a mess around the home.

A lack of attention: Like children, dogs want to be noticed, and when your pup discovers that he can eat and get his owner’s attention, he thinks he’s won the doggy lottery.

By accident: Sometimes, a dog doesn’t know he’s stealing. Use body language – not a raised voice – to teach him that he’s in the wrong, then reinforce good behaviors with a treat. For instance, if he is able to sit quietly while you prepare food, he deserves a snack.

How can I stop my dog stealing food?

Put a routine in place: Dogs love routine. It gives them a real sense of serenity. Try to have your dog doing the same things at the same time every day. That means consistent mealtimes and bed times, and exercise at a specific juncture too.

Give your dog more exercise: Dogs need a lot of physical activity to be happy, and that’s especially true of breeds like the Dalmatian, Boxer, Border Collie, German Shepherd, Lab and Golden Retriever. Unless you’ve got a Chow Chow who likes nothing more than to be curled up on the couch, you need to make sure you’re walking your animal a lot. Google your breed to see the recommended daily activity level.

Don’t raise your voice: One mistake a lot of owners make is to shout at the dog in the hopes he’ll stop. But he just thinks you’re excited. And so he gets excited too, barking back to meet your level. It’s always a better idea to steer your dog towards the things you want him to do, rather than reprimanding him for the things he’s done.

Give your dog a toy to play with: Dogs get lonely, and when they’re lonely, they’re more likely to be destructive. A toy, or a bone, will give your pup something to do while you’re out of the house.

Check that you’re feeding your dog enough: Age and sex both matter. Young male pups for instance need a lot of food, but an older female’s requirements will be very different. Breed is important too. Bigger dogs will need to eat more, so check the portion sizes of the meals you’re serving, and experiment with whether more food curbs the problem.

As a final point – don’t leave food lying around while you’re trying to tackle this annoying habit.